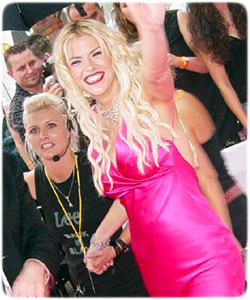 Luisel Ramos (c. 1984 – August 2, 2006, age 22)
Luisel Ramos, a 22-year-old model from Uruguay, died during a fashion show from heart failure due to anorexia in August 2006. She stepped off the catwalk during Fashion Week in Montevideo and fainted on her way back to the dressing room. The gaunt model had adopted a diet consisting only of lettuce and diet sodas in the months prior to her death. Luisel’s father told authorities his daughter often went days without eating. The 5 feet 9-inches model weighed only 98 pounds when she died.

Ana Carolina Reston (June 4, 1984 – November 15, 2006, age 22)
Ana Carolina Reston was a Brazilian model who starved herself to death. The skeletal model reportedly survived on a diet where she only ate apples and tomatoes. When she ate anything else, she threw it up. Ana was admitted to a hospital for kidney failure due to anorexia and bulimia in October 2006. Ana was 21 when she died in an ICU of multiple system organ failure in November 2006. At 5 feet 8 inches, she weighed a mere 88 pounds at her death.

Eliana Ramos (c. 1988 – February 13, 2007, age 18)
Model Eliana Ramos, the 18-year-old sister of the late Luisel Ramos, was found dead inside her grandparents’ home in Montevideo, Uruguay. Her grandmother discovered her lifeless body. Eliana’s death was due to heart failure related to anorexia. Eliana’s and Luisel’s father, famous soccer player Luis Ramos, was vacationing with his wife when his younger daughter passed away in February 2007. The Ramos sisters died from anorexia within six months of each other.

Anna Nicole Smith (November 28, 1967 – February 8, 2007, age 39)
Model, actress, reality television star and tabloid favorite Anna Nicole Smith died from an accidental overdose of prescription medication in February 2007. Anna Nicole was best known for her multiple appearances in Playboy, a sexy series of Guess jeans ads and her controversial marriage at the age of 26 to the octogenarian oil billionaire J. Howard Marshall. Just after their first anniversary, her wealthy husband passed away and a long inheritance battle ensued. Anna Nicole appeared in bit roles in various movies and starred in her own reality show on E! entitled “The Anna Nicole Show”. Tabloids covered her notorious marriage, roller coaster weight, slurred speech at various appearances and her generally outrageous behavior. During her autopsy, the coroner found the sedative chloral hydrate and 4 benzodiazepine drugs (Klonopin, Ativan, Serax and Valium) in her blood. Furthermore, he found the antihistamine Benadryl and two different anticonvulsant drugs in her system. The coroner also found methadone in her bile. The methadone was not a contributing factor to her death but indicated she had taken it 2-3 days prior. Anna Nicole was 39 when she died from her lethal cocktail of prescription drugs.

Count Gottfried von Bismarck (September 19, 1962 – June 30, 2007, age 44)
Count Gottfried von Bismarck, a member of one of Germany’s most famous aristocratic families, died in July 2007 from a cocaine overdose. The Count led a life of privileged excess and debauchery; he was notorious for his drug and alcohol use. His decadent parties were marred by two deaths in his homes. The first death was heiress Olivia Channon in 1986. She was 22 when she died of a heroin overdose in his bed at Oxford University. The Count, while not implicated in her death, was charged with possessing cocaine and amphetamines. The second death occurred in 2006 when a cocaine-fueled reveler fell off of the roof garden during a party at the Count’s home in London. The 44-year-old Count’s dead body was found with his arm blackened from repeated injections on a mattress at his $10 million dollar apartment in Chelsea, London.

Hila Elmalich (c. 1973 – November 14, 2007, age 33)
Hila Elmalich, an Elite Israeli model, died from anorexia in November 2007. The emaciated model was rushed to the hospital in the arms of a friend, photographer Adi Barkan, when she collapsed and could not support herself. Hila died from a heart attack. The skeletal model weighed less than 60 pounds when she passed away just before her 34th birthday.

Next Week: Part 3 concludes the list of celebrities whose lives were lost to addiction over the past decade. The list includes an Academy Award winner who left his fans far too early and a music icon who battled many demons throughout his life.