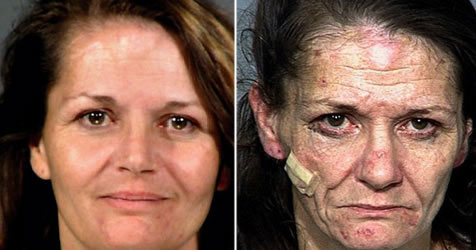 Famous tennis star Andre Agassi made headlines recently when he confessed to using crystal methamphetamine during his record-breaking career. Normally, news stories regarding crystal methamphetamine highlight “meth lab” explosions and ensuing consequences. Manufacturing methamphetamine is very dangerous due to the volatility of the chemicals used and the toxicity of the by-products. Reading that an athletic legend abused this drug known as “poor man’s cocaine” during a highly lucrative, illustrious career shocked the world.

Crystal methamphetamine, commonly referred to as “crystal meth” or “meth”, is an extremely addictive, powerful man-made stimulant. While meth used to be associated with males of a lower economic status, individuals of all ages and economic status from all ethnicities currently use it. In 2008, the National Survey on Drug Use and Health (NSDUH) revealed a shocking statistic – the report estimates that 5% of Americans aged 12 or older have used crystal meth at least once during their lifetime.

Why do people abuse crystal meth? Crystal meth is abused for the long term euphoric high it produces along with providing increased energy. The high resulting from crystal meth lasts much longer than the high resulting from similar, more expensive stimulants such as cocaine. Some people take crystal meth for appetite suppression and rapid weight loss. Others use it for sexual arousal and loss of inhibition. Users usually smoke crystal meth – they heat it and inhale the fumes through a pipe resembling a short glass straw. Crystal meth can also be snorted, ingested or injected.  Street terms for the drug include “ice”, “crank”, “chalk”, “Tina”, “glass” and “crystal”.

Meth, a central nervous system stimulant, causes an elevated heart rate, increased blood pressure, higher body temperature, risk for stroke and the possibility of an irregular heartbeat. People who use meth may have episodes of paranoia, violent behavior, confusion, anxiety, isolation and insomnia. Psychological symptoms include hallucinations and delusions such as the feeling of bugs crawling under the user’s skin. The psychological symptoms from meth can last for months or years after drug use has ceased. Brain imaging studies show that meth use results in significant, permanent damage to the brain. Over time, meth destroys dopamine receptors – making it impossible to feel pleasure. Visible physical symptoms include teeth grinding, talkativeness and picking at the skin.

The before and after photos of crystal meth users are often startling.  Meth abusers frequently appear much older than their age. Meth causes skin to lose its elasticity and luster. Sores and acne appear all over as a result of repeated skin picking. Meth users also exhibit “meth mouth” – mouths full of rotting, broken and stained teeth. The drug causes salivary glands to dry out which allows acid to erode teeth enamel and cause cavities. Teeth are further damaged by obsessive grinding, poor oral hygiene and bingeing on sugary foods.

Through its stimulant effects, meth produces positive feelings. When the meth wears off, it leaves a person with the opposite feelings. This is because the drug suppresses the normal production of adrenaline. A chemical imbalance is created and the result is irritability or depression. Users need more and more meth to produce the same high. This cycle of pleasure and depression leads to a loss of control over meth and the end result can be a full blown addiction.

Look for these signs if you suspect someone is abusing meth:

Getting Help for Crystal Meth addiction

Chronic use of meth is highly toxic and devastating – for the user and their loved ones. If you have a problem or you suspect a loved one has a problem with crystal meth, please seek professional help immediately. Call Shades of Hope for a free private assessment or for advice on conducting an intervention.