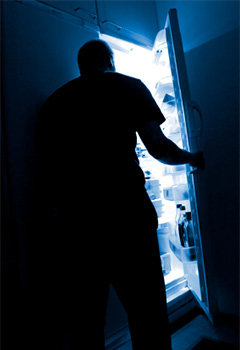 Individuals with NES usually have trouble falling asleep and/or staying asleep. NES can lead to chronic sleep deprivation as it does disturb sleep. Prolonged sleep deprivation has serious consequences including decreased alertness when awake, impaired memory, inability to concentrate, slower reflexes, hindered hand-eye coordination and a greater risk of automobile accidents. Some theories indicate that those with NES self-medicate with night eating, especially carbohydrates, to make themselves fall asleep and quell negative emotions. Carbohydrates elevate serotonin levels. Serotonin is a neurotransmitter that promotes feelings of well-being, calms anxiety and helps with falling asleep.

Abnormal hormone levels have also been linked to NES. Three major hormones have been linked with NES: melatonin, leptin and cortisol. Those with NES are thought to have low melatonin levels. Melatonin is a hormone that helps people fall asleep and stay asleep at night. Leptin, a hormone that suppresses appetite, drops at night in those with NES. Most people have heightened levels of leptin at night which suppresses appetite and allows uninterrupted sleep through the night. Cortisol, the stress hormone, is thought to be elevated at night in individuals with NES. Eating at night is associated with emotional distress.

Many individuals with NES have tried and failed at dieting. They describe their nighttime eating patterns as “uncontrollable”. Individuals with NES are often overweight or obese as a result of their nocturnal eating patterns. Being overweight or obese makes them susceptible to health problems such as high blood pressure, heart problems, stroke, arthritis, diabetes, certain types of cancer, fertility issues, gout, fatty liver disease, gallbladder disease and respiratory diseases including sleep apnea.

Look for these signs if you suspect you or a loved one has NES:

If you or a loved one exhibits signs of NES, please know that you are not alone. According to some studies, NES affects 1-2% of the American population. Recognition of Night Eating Syndrome as a valid eating disorder is contributing to a growing number of studies by major institutions and more information on the topic. While NES has only been in the spotlight relatively recently, Night Eating Syndrome was first described in an article in the American Journal of Medicine in 1955.

Strong links between obesity and NES are being discovered as this eating disorder receives more attention. One study claims 27% of those seeking bariatric surgery have NES. Bariatric surgery only treats the effects of NES; it does not address the underlying disease, emotional issues or disordered eating.

Night eating disorder treatment is available for NES. If you or a loved one exhibits signs of Night Eating Syndrome for two or more months, don’t suffer in silence. Make a phone call and seek professional treatment.