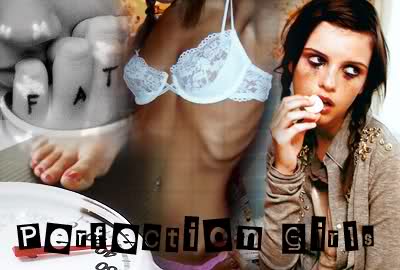 “Honey, we’re all sick but some of us are sicker than others.” – My mom

WIKIPEDIA explains Pro -Ana as: Pro-ana refers to the promotion of the eating disorder anorexia nervosa. It is often referred to simply as “ana” and is sometimes affectionately personified by anorexics as a girl named Ana.The lesser-used term pro-mia refers likewise to bulimia nervosa and is sometimes used interchangeably with pro-ana.

Pro-ana organizations differ widely in their stances. Most claim that they exist mainly as a non-judgmental environment for anorexics; a place to turn to discuss their illness, and to support those who choose to enter recovery. Others deny anorexia nervosa is a mental illness and claim instead that it is a “lifestyle choice” that should be respected by doctors and family.

Pro-Ana isn’t exactly a new movement, it actually has been around (on-line) for almost a decade now. I was doing a little re-search on the topic and…. well, it was disturbing. I found tips on how to safely purge,  how to fast, how to quickly burn 500 cal and how to avoid eating all together. This isn’t the disturbing part… Heck, you can open up any trash mag and find these tips. What’s disturbing  are the devoted followers of Pro-Ana, and their blogs! At one point I actually had my hand over my mouth in shock. Once the shock wore off I found my self lost in the mind of a very sick girl and thankful for the insight that she gave me into her disease.

“I created this blog with a view to help other girls, like me, desperately trying to get skinny. Read this blog in your moments of weakness. Are you hungry ? Soon you won’t. Here are some simple reasons why is better to be skinnier”

I have read that the editors of Vogue have made it a goal to assist in the removal of websites and blogs like these. That webmasters and hosting sites are denying services to Pro-Ana addresses. Is this fair? As sick and dangerous as WE know it to be, do they have a right to be heard?

I’ll leave you with a quote from the movie, The American President.

“You want free speech? Let’s see you acknowledge a man whose words make your blood boil, who’s standing center stage and advocating at the top of his lungs that which you would spend a lifetime opposing at the top of yours. You want to claim this land as the land of the free? Then the symbol of your country can’t just be a flag; the symbol also has to be one of its citizens exercising his right to burn that flag in protest.”