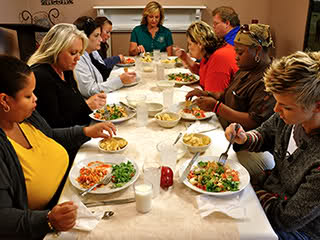 “You had to work to get here. You have to work twice as hard to get out.”

Last night I snuggled up on the couch with a couple of close friends to watch the highly anticipated premier of ‘Addicted to Food.’

First, I would like to thank my higher power for DVR. Before the show started Jenna was busy making queso while Cosmo, the Australian Shepard and I, prepared our notes for the show. In between my mothers frantic texts asking me what channel OWN is on in Fort Worth, as if I knew, and the enticing smell of melted cheese with green chilies, I tried to clear my mind. Did anyone else eat during the show? If so did you feel guilty? I’d like to know. I really wanted to watch the show with an objective perspective, by removing any insight I had into treatment and recovery. Basically, I wanted to watch the show like a Normie (a normal person) as Tennie would say. Unfortunately, this was impossible for me to do… Not because I had been to treatment before, but because of Jenna. You see, Jenna is an LCDC (Licensed Chemical Dependency Councilor) and she talks to the TV. Again, thank you God for the DVR and pause button.

Finally the chips and queso were ready, as the eight arrived (willingly) at Shades of Hope, a residential all addictions treatment center, nestled in the heart of Buffalo Gap, TX. If you haven’t been to Buffalo Gap you need to go. It’s beautiful! When you get there, eat at Perini Ranch. Fresh off the bus, the exhausted addicts got the, howdy-do and what-fer from Camela Balcomb, the executive director of Shades. Camela explained to the nervous group that there will be no drugs, alcohol, binging & purging, TV, phones, cigarettes, caffeine, sugar, sex or unattended bathroom visits for the next 42 days. I immediately freaked out. NO CAFFEINE?!?! I can’t imagine starting my day without my three cups of breakfast blend. That, my friends, is the point. I need caffeine to start my day. It peps me up.. it ALTERS MY MOOD. My morning cup of Joe is how I cope… with the morning. In order to get to the core problem, “The hole in the soul”, all mood altering chemicals must go. Bummer!

As the eight began to disclose their stories in the usual way, I took notice at how beautiful Layne (compulsive over eater) and Camille (laxatives) are. As they spoke my heart broke for them. I wondered if they could see in themselves what I saw in them? Elizabeth, on the other hand really amused me. She is what I like to call, “A hot mess.” Elizabeth shared with us that she has been binging and purging for almost 30 years and to top that off she has been counseling and treating others with eating disorders. “No she di’int!!!!” Jenna exclaimed when Elizabeth told Robbie that her addiction and pain were deeper than his.  With eating disorders you may say that it takes one to know one. True, but Elizabeth hasn’t found or accepted a solution yet. What hope can she present to those she counsels? I agree with Tennie that she is the sickest of them all. Meanwhile back at the ranch, literally, Dejuaii confessed, despite her parents’ fears, that she was 45 years old, living at home and still a virgin. A preachers daughter, she grew up with oppressive religious rule. Shame is the name of her game and I know that game very well. Later on she shared with Elizabeth and Camille that she is not attracted to men. Did you see Camille smile? Yeah, I’m pretty sure I know why she’s smiling also. To recover from our addiction we MUST be honest with ourselves and others.

Rarely have we seen a person fail who has thoroughly followed our path. Those who do not recover are people who cannot or will not completely give themselves to this simple program, usually men and women who are constitutionally incapable of being honest with themselves. There are such unfortunates. They are not at fault; they seem to have been born that way. They are naturally incapable of grasping and developing a manner of living which demands rigorous honesty. Their chances are less than average. – Alcoholics Anonymous, Chapter 5 How it works

As enlightening and genuine as this show is, it is still entertainment for the masses; but not for us, not for the people who are struggling. I must admit that I get caught up in the before and after. I want to see the results! How much weight will they actually loose and gain? I have to remind myself that it is not about the weight loss like ‘The Biggest Loser’. This isn’t the ‘Real World’ for the middle aged. This is not ‘Celebrity Rehab’ where the money goes to charity. These are everyday people, like you, with a hole in their soul.